What is Hair Transplantation with DHI Technique? 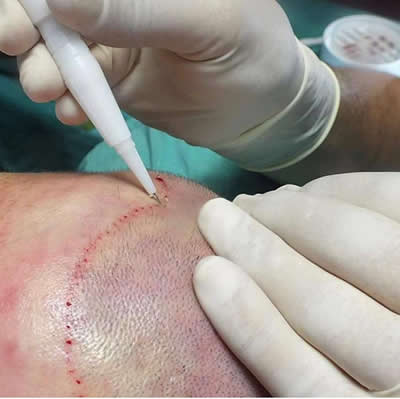 How is Hair Transplantation with DHI Technique applied?

If the hair transplantation candidate has the appropriate properties for the DHI method after the necessary examinations are performed; doctor-patient joint decision is determined for the transplantation day. On the day of operation, only the donor area (usually the nape area) of the patient is shaved, and micro-motor mediated or manually grafts containing single, double, triple or quadruple hair follicles are started to be collected.  Collected roots are placed in the plantation area without waiting. At this stage, the Choi pen is comes into the process. The hair collected are planted with the Choi. The biggest difference that differentiates the DHI method from other hair transplantation methods is the fact that, thanks to Choi, channel opening and hair root placement can be done simultaneously.  With the tip of Choi in the plantation area, the canal is opened and the hair root is placed in the canal and the plantation process is completed.

Hair Transplantation with DHI technique provides a better possibility for planting more dense hair roots when compared to other hair transplantation techniques. Thus, more natural-looking and lush hair can be achieved. In addition, it is much easier to adjust the symmetry in the front hair line, which is of great importance in hair transplantation procedures, to extend the hair to the original exit directions and to open the channels where the hair follicles are placed at the right angle with the help of Choi. All these parameters, which are necessary for a natural result, are very easy thanks to Choi, but the doctor’s expertise is the determining factor.

The doctor’s expertise is very important because the DHI hair transplant method is a procedure that requires very special care. There is no reason why the Choi technique applied by an expert doctor and team should not work. Direct hair transplantation is an ideal method for patients who cannot be transplanted with FUE because of their bleeding density.

What Women Should Know About Hair Transplantation

What are the differences between the DHI method and the FUE technique?