The hair transplantation is; to place the grafts extracted from the donor area to the areas with hair loss by using different hair transplantation techniques. Hair transplantation is a method that is used successfully for the people who have lost all of their hair or have lost some part of their hair as well as it is a method used for the hair losses caused by burns and injuries. It is also an ideal treatment in the cases of partially losses of hair. While all of the techniques are focused to produce natural results and the comfort of the patient, they have different stages and application manners. After evaluating the patient’s hair structure and the regions with hair loss and choosing the technique that will produce the most natural results, the day of the operation is determined and the application is realized. The people who have hair transplantation operation can dress and cut their hair as they wish. 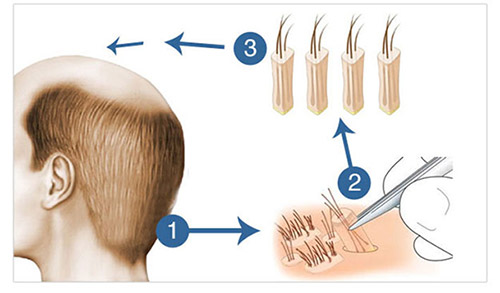 FUE (Follicular Unite Extraction) that is the most common hair transplantation technique is place the hair roots extracted from the nape to the areas with hair loss by applying local anesthesia. In FUE method, hair transplantation is realized with the thin pin needles called punch. Since the patient is under anesthesia, he/she does not feel any kind of pain.

In FUE technique, most of the time the donor area is the nape. The hair roots exctracted from the nape are placed to the areas with hair loss problems.

The patients who are very young and whose skin elasticity is very high tend to form wide scars. Therefore FUE technique is preferred in the operations of this kind of patients.

The hair transplantation with FUE technique consists of 3 stages.

1.Stage: It takes one hour. The hair of the patient is cut up to 0.3mm and the patient is anesthesized. After examining the hair structure of the nape, arms, legs, back and chest of the patient, the area to extract the hair root is determined. Although most of the time the donor  area is the nape, in some very rare cases the  other areas also may be used as donor area.

2.Stage: It takes approximately 3 hours. The single hair roots (grafts) are extracted with 0.8mm punch from the donor area. These hair roots are planted to the front hair line in order to have a natural transplantation appearance. The follicles that have 2 or 3 hairs are extracted with 1mm punch in order to have a dense transplantation appearance. These follicles are plante d after the single grafts.

3.Stage: It takes approximately 3 hours. The last details about the area to be planted are discussed and the area is anesthetized. The diameters and the depth of the follicles of the patient are calculated. The channels where the follicles are going to be placed are opened with especial lateral slits prepared for hair transplantation. When the channel opening process is completed the hair transplantation operation finishes. 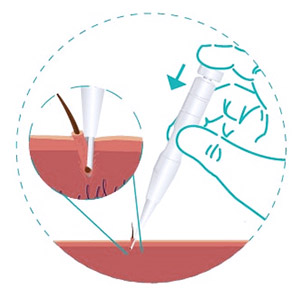 The hair root transfer in DHI method is realized without openning channels (without making cuts). Since pens with very thin pins are used, the operation produces a more dense result. The recovery period of the irritated are is faster than the other techniques in the operations realized by using DHI technique.