Hair Transplantation in Turkey, is a treatment method that has been applied for 20 years in order to end the hair loss problem permanently. The hair loss problem, while damaging the self-image of a person, also brings psychological problems with it.

The problem of self-confidence, which starts with the symptoms of closure and timidity, can affect all areas of our lives by causing other communication problems. Hair transplantation is one of the most common aesthetic procedures carried out in recent years. While the main causes of hair transplantation are genetic causes and an excess of testosterone hormone; Alopecia Areata, skin problems, internal diseases, the use of various drugs, stress, psychological factors and environmental factors can also cause permanent hair loss.

Alopecia Areata and Androgenetic alopecia, one of the most common problems in Central Asia especially and Turkey as a result of the geographical location. For this reason alone, hair transplantation ranks as one of the of the most needed and performed operations in the last 20 years.

Every hair strand has a cycle of life. Hair strands enter a resting period after lasting for 4 to 6 years growth period, and then they fall off and leave their places to new hair strands. A healthy scalp contains approximately 100,000 hair strands. As we all know now, 100-150 hair loss per day is considered normal in adults. However, in the periodic cycle of hair loss, if the hair loss is experienced 3 times a year for more than 2 months, it can be a symptom of some diseases. 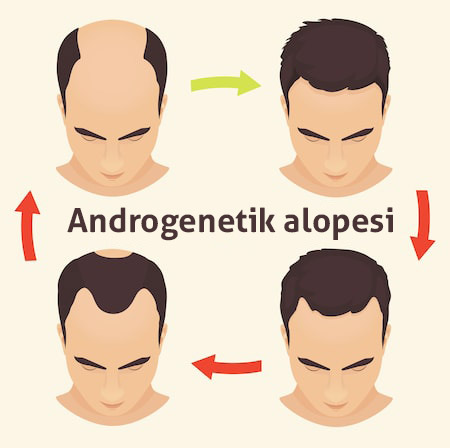 Androgenetic alopecia is a disease in which male hormone (testosterone) accumulates in hair follicles due to genetic reasons, resulting in hair thinning or loss by disrupting the nutrition of the roots. The disease, which is known as male type hair loss among the population, can be encountered not only in men but also in women. Male type hair loss, which is more prominent in men (especially during puberty), may appear in women during pregnancy and menopause Female type androgenetic alopecia is usually observed in women with high androgen levels. Androgenetic alopecia, which causes regional hair loss in men, manifests itself differently in women

As with many diseases, when the disease that can be exacerbated by stress hormone is diagnosed in the early period, it is treatable and the thinned hair can be re-thickened. However, there is no chance of treatment in cases with delayed diagnosis. The effects of male type spillage in the late period can be compensated by hair transplantation alternative. Hair follicles can be transferred to areas where hair is thinned or completely lost, and hair growth can be achieved again.

Health tourism, which has been quite active in recent years, is based on the fact that patients visit different countries for treatment. Among the countries having the most intense number of visitors in the area of ​​health tourism comes Turkey, and Istanbul ranks at the top as one of the most visited cities of health tourism.  One third of the tourists that our country hosts for treatment prefers Turkey for hair transplantation and plastic surgery.

Compared to other countries, the fact that Turkey is in a leading position regarding plantation consists of multiple reasons. The success rate of operations, the experience of doctors due to the density of male pattern hair loss in our geography, appropriate price policy, the technology used in operations, the fact that Istanbul houses a lot of tourist attractions and is a safe city, the fact that accommodation alternatives are clean, high in quality and affordable are the reasons why our country is preferred for health tourism. In addition, the fact that our country is surrounded by the seas causes it to play an active role in health and hair transplantation tourism by sea. The process speed in hair transplantation operations applied in Turkey is at a high standard as a result of the immense experience. Plantation from 3000-5000 grafts carried out in Turkey can be applied in between 6 to 9 hours on average, while European countries may need 2 to 3 days for the same operation. The fact that it can be completed in a shorter time means that it is more comfortable for the patient as well as providing them a huge time save.

According to the tourism statistics announced in 2016, 60,000 tourists visited Turkey to make hair transplantation during 2015 The data, which were determined as 5000 people per month, displayed an increasing graph over the past 2 years. According to the results of another research on Google; the phone calls conversed in English regarding “Hair plantation in Turkey” has increased at a phenomenal rate of 530% in the last 5 years. One of the reasons why our country, which attracts visitors from Saudi Arabia, Greece, Spain, Kuwait and Russia at a serious rate, has become a renowned brand in the field of Hair transplantation is the fact that Turkish doctors contribute to many studies abroad in the field of hair transplantation.

FUE is the most widely known and applied technique. FUE is a technique carried out with the help of fine-tipped needles called punch.  As in any technique, the donor region is the nape region of the patient. Grafts taken from the donor area are placed in the transplant areas with the help of punches. The first phase of the FUE, which consists of three stages, takes 1 hour. After trimming the patient’s hair, local anesthesia is performed. Potential donor sites are determined and selected according to their hair structure and root quality. The second stage takes 3 hours on average. With 0.8 mm punches, the hair follicles (grafts) are collected and planted in the front hair line. In order to capture the intense and natural image, grafts of 2 and 3 are collected and continue to be planted. The last stage takes 3 hours on average. According to the last details of the transplantation zone, the designated area is anesthetized. Diameters and depths of the hair follicles are calculated. The channels where the hair follicles will be placed are opened with lateral slits.  The hair transplantation process ends when other roots are collected from the donor area are transplanted into the channels that are opened previously. Two days after transplantation, the patient is welcomed again for the first washing procedure. Fue technique is applied by our expert doctor with the privilege of Hairtransland.

A very special technique Percutane requires quite a lot of experience and labor. Therefore, it is an application form that can be applied in the world in a number of clinics. It is also known as “Hair transplantation with Needles”. In percutaneous hair transplantation, the donor region is the nape of the neck. The hair strands loosened with the device called micromotor are collected with a tweezers-like device. Hair strands that are picked up one-by-one are made ready for planting. In the transplantation zone, micro-round channels are opened with the help of a needle. The hair roots, which are prepared for planting, are placed in the open canals. As the channels are rounded, the hair follicles are better grasped, and because of the micro-level plantation they allow for more frequent hair follicle plantation. 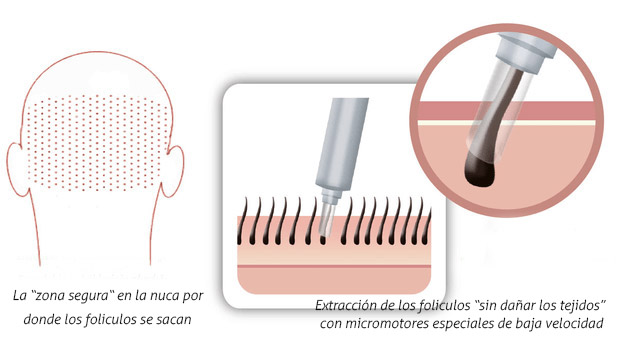 The fact that the channels that are opened are micro-sized also reduces the recovery time. Thanks to the more narrow angles; the front hairline which is the most important factor in hair transplantation comes out very smooth. A straight-line front-line provides aesthetic appearance and naturalness. Two days after transplantation, the patient is welcomed again for the first washing procedure. Being a very special technique in hair transplantation, Percutane technique is applied by our expert doctor with the privilege of Hairtransland.

One of the most important factors in obtaining the natural appearance of hair transplantation is to achieve the right angle while placing the hair follicle in the transplantation area, and transplant the roots that are placed as dense as possible. The right angle determination phase, which requires serious expertise, is much more simplified by the help of Choi used in the DHI application. DHI hair transplantation, which allows direct planting to the required area, provides an extra advantage to those who have not completed their hair loss process yet. Two days after transplantation, the patient is welcomed again for the first washing procedure. DHI technique is applied by our expert doctor with the privilege of Hairtransland.

Beards and mustaches for men are aesthetic elements that seriously affect the identity and the character of the face. FUE, DHI or Percutan techniques can be used in beard and mustache plantations which can be done once the patient reaches 20 years of age when hormones reach basal level. The hair roots collected from the nape area as required by the technique used are transferred safely to the beard or mustache area. In the case of beard transplants an average of 1000-3000 grafts are transplanted on average. Beard / mustache plantation gives results after 8-10 weeks. There is no difference between the planted ones and the beard / mustache found in the area before. It is also possible to hide the deformations and traces originated from wounds, surgery and burns in the beard / mustache areas with the plantation process.

In particular, the most important factor affecting the naturalness in the process of beard plantation is the calculation of the correct angle of beard follicles in the area.  Grafts placed in the right angle according to the angles present in the nearby areas provides the most natural look possible.

Hairtransland Hair Transplant Clinic is serving in the international arena with its expert and qualified staff with 17 years experience in Istanbul, Turkey. The special design of hairs, which is the most important details of a person’s look; hair transplantation using FUE, unshaved DHI and Percutane techniques, eyebrow transplantation, mustache transplantation, hair simulation, obesity surgery and plastic surgery can also be carried out in our clinic. All our services are provided by our specialist physicians in sterile environments by keeping the quality and health standards at the highest level, and protective and supportive alternatives are offered by our expert team in the long run.

We use the latest technologies simultaneously with the whole world in the health sector where our partnerships and experience with rooted hospital groups are our biggest reference. In addition to our approximately 16000 happy references from 12 countries, we are moving forward with confident steps in the international platform with the pride of being the follower and user of all innovations made in our field in order to provide reliable, friendly and high quality service. 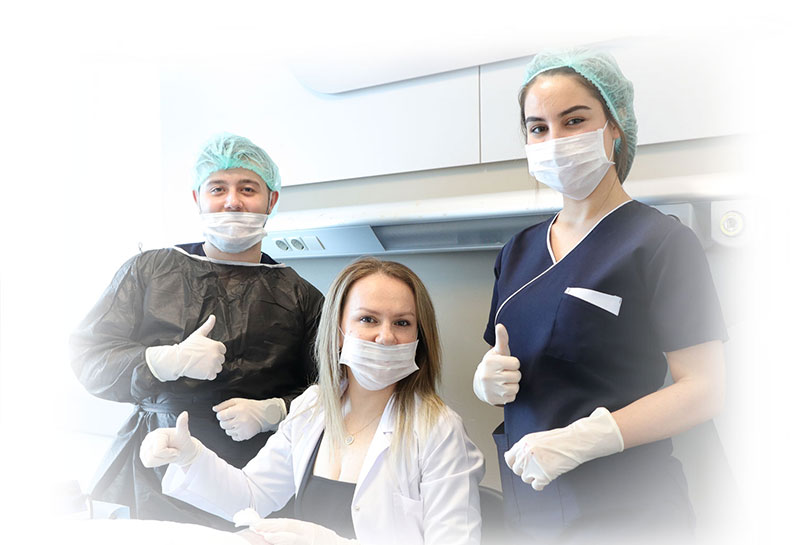 A pre-meeting is arranged between our consulter and our expert doctor In the preliminary interview, after the patient’s expectations and health history are learned, our client is informed in detail about the transplantation procedures. After the preliminary interview, the client is examined. In the examination, the first step is the treatment of diseases such as seborrheic dermatitis (eczema), tinea capitis (fungus in the skin) and alopecia areata if they are found in the patient. Although there is no problem, mesotherapy treatment is performed if the hair structure is not suitable for transplantation. After the problems found during the examination (if any) are eliminated, the day for hair transplantation is determined.

Hygiene and sterilization are of great importance in order not to be exposed to any complications due to hygiene of the patients. Besides the sterilization of the area in which the transplantation process is going to take place according to the health standards, the hygiene of the equipment to be used is of utmost importance. After the operations, all equipment used is sterilized by sterilization device according to health standards. The equipment is purified from all microorganisms, including spores, by the high temperature applied by the device and by the chemical liquid used.

Hepa filter is used in our clinic to maintain and protect hygiene standards.